Discover the best tours and activities in Jeju Island 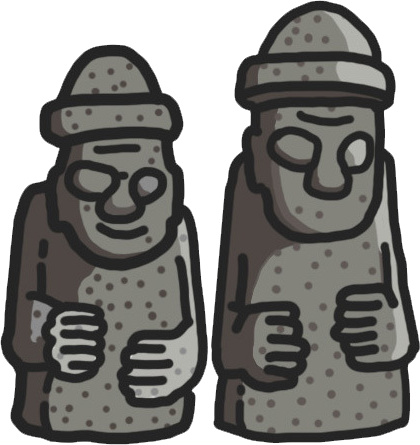 A Beautiful Legacy that is a Gift of Nature

Beautiful Jeju Island, which was designated as a World Natural Heritage Site by UNESCO, is also an iconic tourist spot that first comes to the mind of people who are thinking about traveling to an exotic landscape.

Jeju is an island of illusion that comes to mind when you want to leave the burdens of reality, or want to experience true healing by immersing yourself in untainted nature. The beautiful landscape of Jeju, which is also one of the top seven natural landscapes in the world, can be experienced by watching the impressive sunrise on Seongsan Ilchulbong Peak, visiting Jeju Jeolmul Natural Recreation Forest, which is connected by a lush forest path of Japanese cedar trees, and Seopjikoji, which is a site frequently used for filming dramas and movies.

The dazzling unexplored sights continue at Dragon Head Shore, which was created by the endless crashing of waves against the shore cliffs, and the Soesokkak Estuary, a mysterious gift of nature. Cute teddy bears and the opportunity to taste sweet-and-sour Jeju tangerines are also special presents that visitors can only experience on Jeju Island. Have an unforgettable experience on Jeju Island, a picturesque getaway where pretty pictures can be taken at any spot. 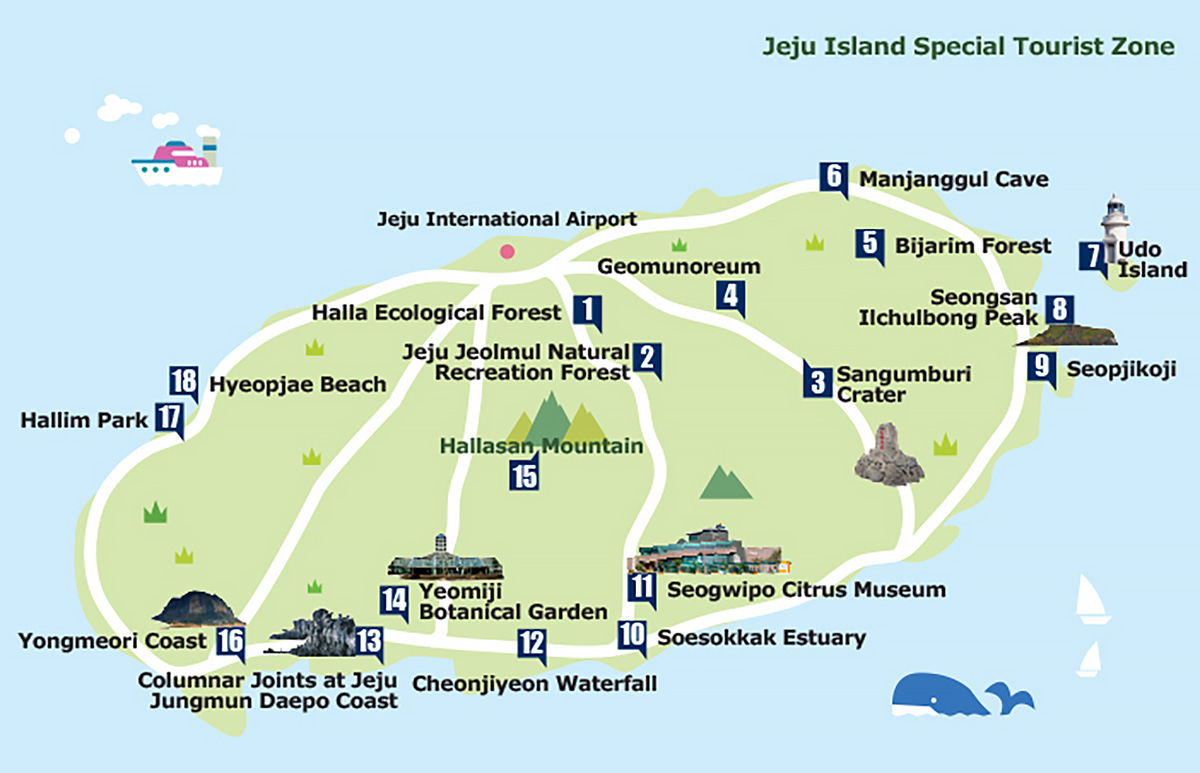 Jeju Tours and Activities List
Name because of its abundance of wind, rocks and women

Samdado was given its name of Jeju

Samdado was given its name because of its abundance of wind, rocks and women.
Hidden within Samdado is the history of Jeju residents who wisely and stubbornly overcame their natural environments.

Wind – A Land of Wind Where the Wind Does Not Sleep

Situated in the eye of the storm, Jeju is an island of wind.
On stormy days, when you stand in the ocean, you can witness the pure force of Jeju wind.
There is no other place than Jeju with such a variety of names for the wind. Hanuibaram (west wind), Nophanuibaram (northwestern wind), Nopsaebaram (northeast wind), Saetbaram (east wind), Maparam (south wind), Dongmaparam (southeasterly wind), Galbaram (west wind), Seotbaram, Seothanuibaram, Yangdusaebaram, and Yangbaram are all examples of names for the wind.
Jeju residents have fought, opposed, avoided, soothed, and used the wind, which came to them bearing different names, to create a special wind culture of their own. Now, the Jeju wind is being collected as electric energy as the world enters a new era.

Stones – An Island of Stones

Jejudo Island is a country of goddesses.
The procreation goddess Seolmundae, life goddess Samseung, wind goddess Yeongdeung, agriculture goddess Jacheongbi, destiny goddess Gameunjangagi, and other major deities of Jejudo Island are all women.
Village goddess and household goddess are almost all women as well.
Thus, Jeju is a country belonging to goddesses. Why are there so many goddesses in Jejudo Island? This is because the original form of the initial myths, which retains the origin of human history, still remains to this day.
Additionally, this has some relevance to the active disposition of Jeju’s women, which has sustained them through their rough history and difficult circumstances.
Whether it being working in the ocean, picking weeds in the fields, selling goods at the marketplace, carrying firewood, or carrying water, all these roles were played by women. As such, how could it not be perceived as an island of women?
Jeju’s reputation as the island of women, where women played a central role, reflects its old history to this day.

These are dyed clothes using the juice of green persimmons. At first, the material becomes hard and takes the color of red clay, but with more frequent wear, the color changes to brown and the material becomes softer to the touch. It was a perfect item for work clothes as it was not prone to being easily soiled or soaked in sweat.

Made up of the water towel on one’s head, Mulsojungi pant, and Muljeoksam top, this was the clothing that Jeju Haenyeo (female diver) used to wear during Muljil (diving work) before the black rubber clothing from Japan came into place in the early 1970s.
Jeongdang Moja (Hat)
Made of stem of Cocculus roots that grow in the mountains, the hat was mainly worn by shepherd or farmers. The hat block was sized to fit the head of the wearers, while the Gat was made relatively large to block the sunlight.

People visiting Jejudo Island for the first time often get confused to which restaurant they should go to in order to have the best black pig. The best answer for this scenario is, “Go anywhere”. Jeju’s black pig cuisine tastes good no matter where you go.

The grilled black pig tastes even better when you dip it in the Meljeot sauce, which is made of anchovies. It gets rid of the oily richness of the meat and invigorates the taste-buds at the same time.

Jeju has a lot of pheasants, which has resulted in a diverse range of pheasant dishes. It is the autumn pheasants that taste the best and one can eat them as raw pheasant or pheasant jerky.

Kkwong Toryeom, thinly sliced, pheasant’s breast meat can be eaten as Shabu-shabu, which is another Jeju delicacy. The Kkwong Memil Guksu (Buckwheat Noodles in Pheasant Broth) made of Jeju buckwheat and pheasant broth is light and easy for digestion.

Kkwong Manduguk (Pheasant Dumpling Soup) boasts of a clean taste without the oiliness.

Horse dishes used to be the highest quality cuisine that went into the King’s royal table.

Horse meat is lighter in taste than beef and there is a different taste for sections such as intestines, raw liver, and lean meat.

It is easy to see pork noodle soup houses in Jejudo Island.

One can eat pork noodle soup with noodles in creamily infused meat broth, add boiled pork on top, and personalize the flavor to your taste-buds by putting in Cheongyang Gochu (Cheongyang Hot Pepper), chili pepper powder, and powdered black pepper.

Just like how drinking the spicy noodle soup makes you want to have a shot of soju, there is a lot of alcohol in the refreshing and meaty pork noodle soup.

Drinking it with the Jejudo Island region soju, Hallasan, would be a great finish!

The traditional house of Jeju begins with the ‘Olle’. In the entrance of the Olle is the ‘Jeongnang’.
The Jeongnang is the three logs that are laid across the entrance. The stone pillar erected on each side of the Olle entrance where the Jeongnang is inserted is called ‘Jeongjumok’.
It is said that the Jeongnang was first made because of horses and cows. According to the tradition of Jeju, people used to put horses and cows out to pasture.
They needed to put up Jeongnang in order to prevent the horses and cows from coming into their house.
The reason why they used logs rather than making a door was because of the wind.
Jeongnang is not affected by the wind, so it does not fall even in the case of a storm.
Why were there three logs? It was a signal between the home owner and the guest that allowed them to exchange information.
If there were three logs, then it meant that the home owner was out for the entire day.
If there were two logs, then the home owner was out for a relatively long time.
If there was only one log, then it meant the home owner was out for a short period of time.
Depending on the house, the length of Olle was short or elongated. It also had various forms, from straight to curved and from circular to wide to narrow.
Jejudo Island has a lot of wind. But even the toughest wind becomes milder after they going through an Olle stonewall that has been built with a moderate curve.
It is difficult to see the inside of the house because of the Olle. As such, the Olle acted as an entity that would block the outsiders from looking in as well as the wind from coming in. Jeongnang and Olle are unique residential sights that can only be seen in Jeju, and nowhere else in the world.

The Straw-roofed house is also another unique residential view that can be witnessed only in Jeju.
First and foremost, it is extremely strong. The exterior is built with stonewall. The wall is applied with soil, which strengthens the stonewall.
The roof is covered with band and tied with a thick rope, like a go board.
The Straw-roofed house of Jejudo Island is the result of the wisdom of Jeju’s virtuous men, who sought to overcome their natural environment, which saw a great deal of rain and wind.
What is unique is that everything resembles the shape of the ‘character, and that there is no Sarangmadang or Sarangchae (main building where the men stay and welcome guests) unlike houses of other regions.
Jeju house are arranged into the Angeori (building located at the center of the compound) and the Bakgeori using the courtyard as the central point.
The Angeori stores liquor for ancestral rites, and is where ancestral rites take place.
When the son of the household gets married, the parents live in the Angeori and the son’s new family live on the Bakgeori. After some period of time, they switch, which signifies that the role of performing the ancestral rite has moved from the parents to the son’s family.
Family affairs, monetary gifts, joint property rights, and attending to the temple could only be done by the people living in the Angeori.
Thus, the Angeori was very meaningful. Both the Angeori and Bakgeori had separate kitchens, jar platforms, and Tongsi (toilets) so that the two generations could live independently from one another.
It is considered as one household, but in economic terms, it actually retains two families. As a result, in Jeju houses, there is an eclectic mixture of a unique family system, climate countermeasures, geometric geography, and shaman faith resulting in a combined culture.

Dottongsi is Jeju’s traditional toilet. It lacks a roof, and only has low stone walls to block out the wind and keep outsiders from looking in.
There is no odor, no need to worry about falling into the basin, and no hazard of night soil splashing onto your feet.
As such, it was a safe and cool toilet that people could use to take care of their business while looking around.
However, it was not just simply a toilet, but served as a cage for pigs as well.
Barley straw was placed on the floor of the Dottongsi.
By undergoing natural fermentation with the barley straw, which was mixed with the bodily waste of people, pigs became invaluable fertilizer for Jeju agriculture. Dottongsi is an unparalleled environment purifying space as well as a unique residential cultural element that can only be seen in Jejudo Island.

Discover the best tours and activities in Jeju Island