When you book with an account, you will be able to track your payment status, track the confirmation and you can also rate the tour after you finished the tour.
Sign Up
5756 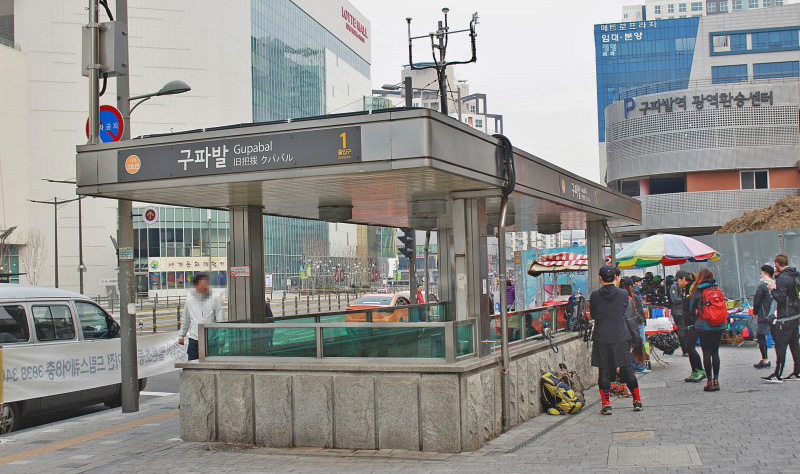 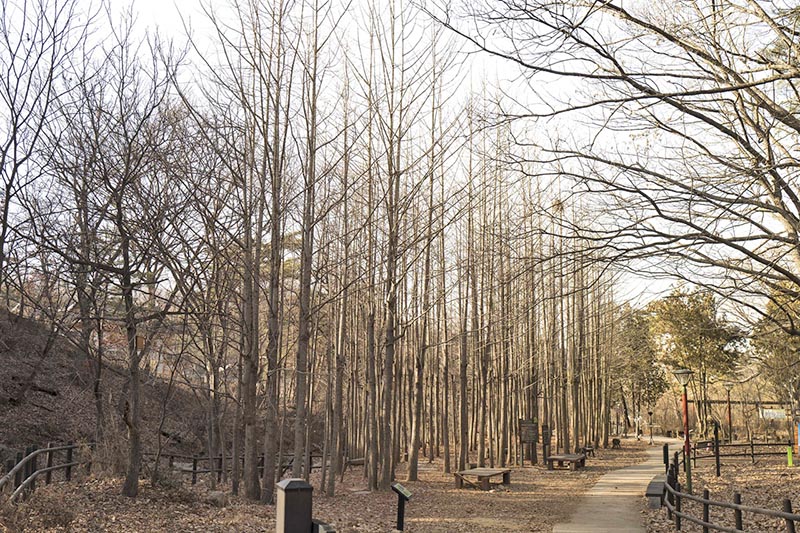 The Masil-gil is the ninth section of Dulegil(Bukhansan trail). ‘Masil’ is a word from regional dialect meaning ‘village’ or ‘hang out’. A friendly village culture has existed in Korea since ancient times, as neighbors freely shared their food and grew close to one another. However, this unique culture is quickly dying out due to Korea’s rapid industrialization, and Koreans are now more nostalgic about these community cultures than ever before. 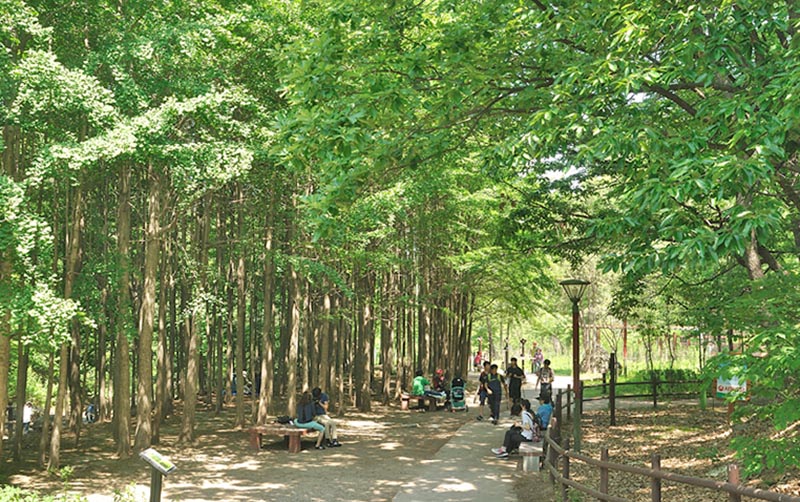 You can comfortably walk along this road as if you’re visiting a neighbor. It’s a short course that takes about an hour, as well as the flattest road of the eighteen Bukhansan Dulegil sections. At the Jingwan Wildlife Sanctuary, you can see various swamp organisms. And very near here, there’s also a Korean royal tomb. You’ll also encounter a forked road that leads to a temple of great historic importance. You’ll see large zelkova trees that are about 250 years old. They create shade all year round. Under the zelkova trees, you’ll see a swamp filled with innumerable reeds. This area was selected as a “wildlife sanctuary” in 2010. This area protects vulnerable species that are found only in Northeast Asia, including Korea. 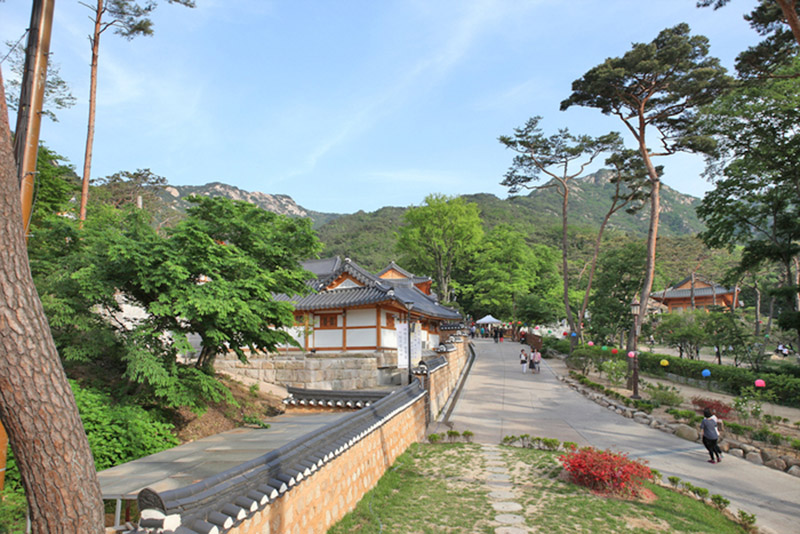 Jingwansa was established in 1011 to repay the Buddhist priest Jingwan for saving the life of King Hyeon-jong, the 8th king of the Goryeo Dynasty when he was young. When Hyeon-jong was twelve he was kicked out of the palace during a power struggle and monk Jingwan took him in, thereby saving his life. After Hyeon-jong once again took his place in the palace and became king he had this temple built for Jingwan and put it under the special protection of the Goryeo royal family. 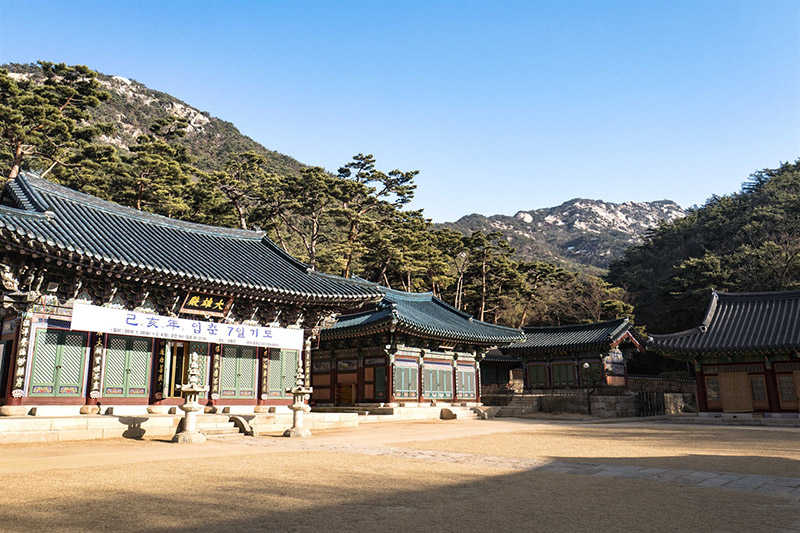 During the Joseon Dynasty, a library was added to the complex by King Sejong for Confucian scholars and the education hasn’t stopped there. This is the only temple in Seoul which serves Suryukje, a Buddhist ceremony to provide food and the Buddhist teachings to spirits and starved demons who wander the land and sea. The ceremony is performed every leap year for 49 days. The temple also has training facilities for Biguni, or female monks, and offers a temple stay program to visitors. 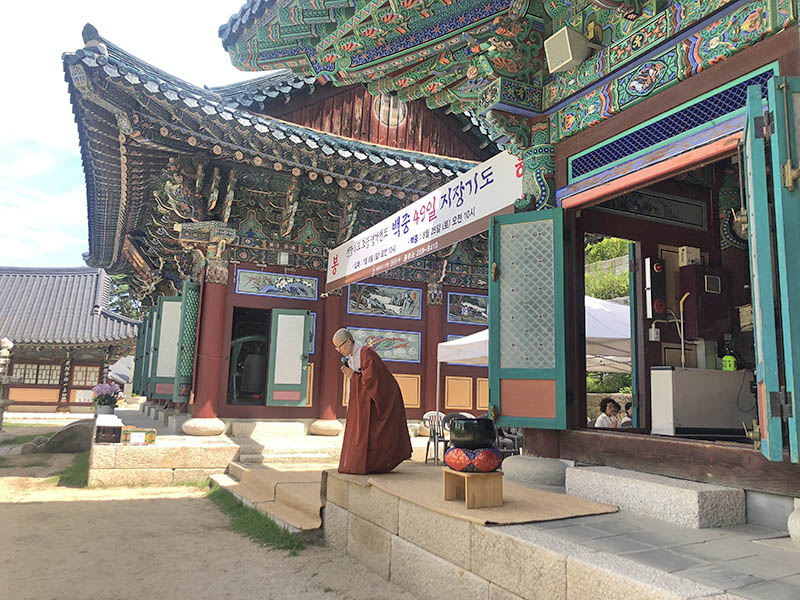 They contain artifacts from the late 16th to the early 20th century and are cultural assets of Seoul. In 2009, during restoration to the buildings, a Korean flag and other materials from the Korean Independence Movement were found here and are considered to be historical records representing the movement against Japan by anti-Japanese monk Chowol Baek. 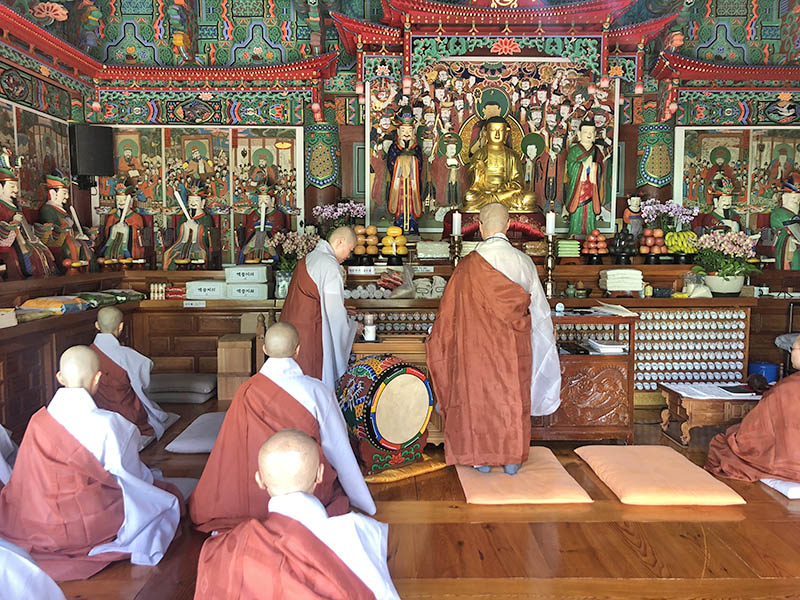 There are a variety of programs offered, including a “freestyle” program, a program that lets one experience the daily life of practitioners in the temple, as well as Buddhist cultural programs, and others designed for groups and those with regular jobs. The programs feature chanting services, 108 prostrations, tea and conversation with a monk, meditation, monastic formal meals and the preparation of temple food. This is the only temple in Seoul that serves “suryukje,” a Buddhist ceremony that provides food and Buddha’s teachings to spirits and starved demons that wander the land and sea, and provides training facilities for female monks. The Jingwansa National Suryukdaeje is a royal ceremony practiced exclusively in Seoul for 600 years after the first king founded the Joseon dynasty. It is performed every leap year for 49 days between August and October and is designated as Intangible Cultural Heritage No. 125 by the government. 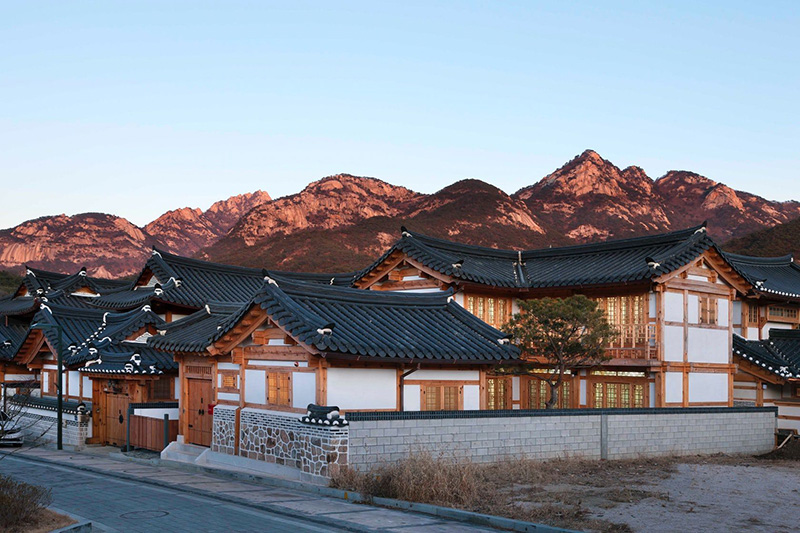 Eunpyeong-gu is situated in a basin surrounded by hills and mountains, including Baengnyeonsan Mountain (216m), Bibong Peak (560m), Eungbong Peak (236m), and Bukhansan Mountain (837m), except the southeast part of the area. Originating from Bukhansan Mountain’s valley, Changneungcheon and Bulgwangcheon Streams run through the center of Eunpyeong-gu and flow into the Hangang River. Green spaces account for 53.5% of the entire area and form part of Bukhansan Mountain National Park and a limited development district, so the residential area has a pleasant environment. Eunpyeong Hanok Village was established in December 2014 as the largest neo-hanok residential complex in the capital area. As the neo-hanok are designed to enhance the strong points of the traditional hanok and to supplement its weak points, they are expected to lead the development of future-oriented urban hanok by reducing construction expenses and improving their housing functions. 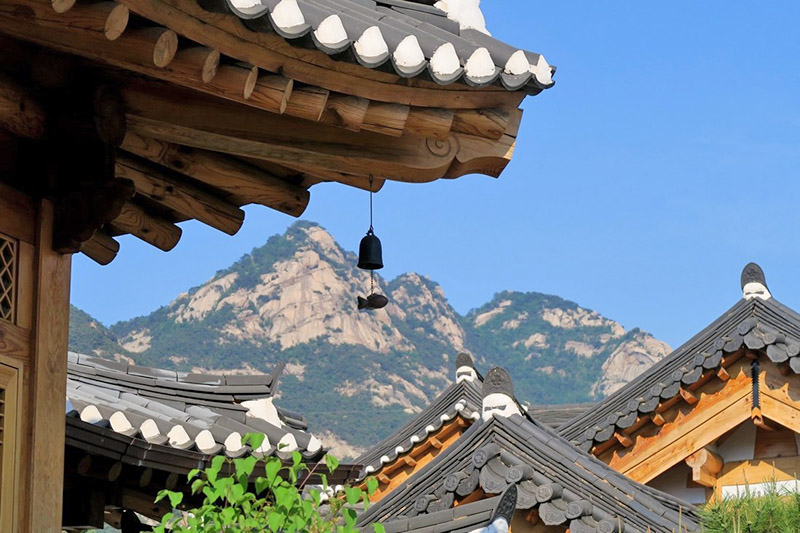 The Eunpyeong Hanok Village in Seoul is a district situated between a large apartment complex and Bukhan Mountain. The word ‘Hanok’ might be a very ambiguous term for foreigners. After the modernization, the houses that were built in Western style were called ‘Yangok’ (literally meaning Western House) and Koreans began to call the regular houses as Hanok (meaning Korean house) as an opposite concept. However, the phrase is a platitude expression that can not contain the full emotion towards our old house. In modern Korea, Hanok only remains intact in some traditional villages and in designated areas, including Bukchon in Seoul. As the government enforced its policy to support the construction of Hanok, the number has been gradually increasing. The Eunpyeong History & Hanok Museum is an exhibition hall that opened in 2014 in the Eunpyeong Hanok Village area and allows visitors to appreciate and experience the history of Eunpyeong, and Hanok. This 3-story museum has a total floor area of 2901 ㎡. On the 1st floor, a toy library, education room, pond, and rest area can be found. The 2nd floor includes a library and Eunpyeong History Hall in which the cultural heritage of the area can be appreciated. The Special Exhibition Hall and Hanok Exhibition Hall are located on the 3rd floor. On the roof and outside, a tile kiln place of the Unified Silla Period is installed. 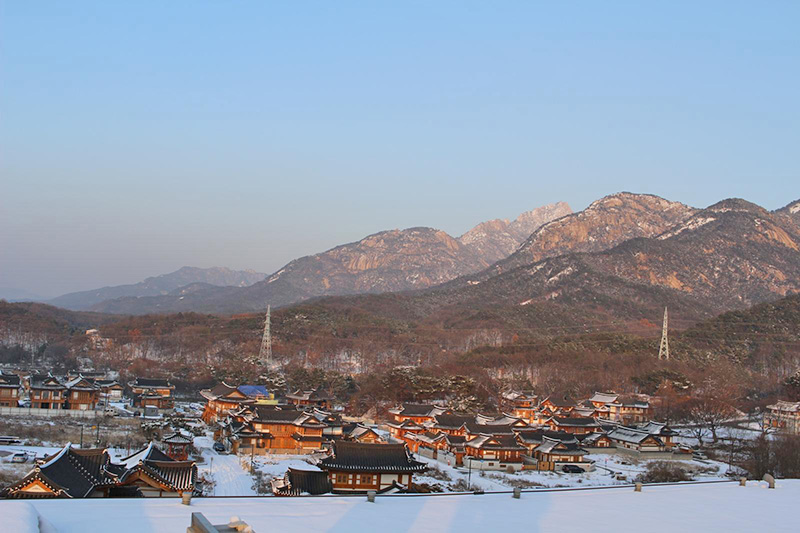 You can also wear Hanbok at the Korean Culture Experience Center in the museum for 1 hour with your museum entrance ticket(1,000 won) for free. You can enjoy a cup of coffee at the roof top, overlooking Bukhansan Mountain. Why don’t you take a break from feeling tired of skyscrapers in Seoul while enjoying a cup of tea or coffee feeling Korean tradition? The tour assistant will take you to the cafe you want to go, then the tour ends there. You can have private time, and take a rest as much as you want to on your own.

Meet up your English speaking tour assistant at the subway station and take a bus to the entrance of Bukhansan Mountain.

You can enjoy nature and walk slowly on Bukhansan Mountain to enjoy the clear air in central Seoul. You can visit Jingwansa Temple, which not only has great cultural significance but also give you the chance to experience Buddhism.

Eunpyeong Hanok Village is soon to be a popular tourist spot in Seoul. Don’t miss the chance to enjoy the traditional Korean house and atmosphere before it gets too crowded. You can also visit the museum and try on Hanbok(Korean traditional dress) and take some memorable photos.

There are quite extensive kinds of cafes on the streets of Eunpyeong Hanok Village. You can go to any cafe you want to, and enjoy your private time. The tour assistant will let you know how to get back to the station from the cafe and the tour ends there.