When you book with an account, you will be able to track your payment status, track the confirmation and you can also rate the tour after you finished the tour.
Sign Up
16995

⚡️ This package offers different prices according to the number of participants. Please check carefully and select the number that applies to you.

⚡️ The schedule may change according to the circumstances. 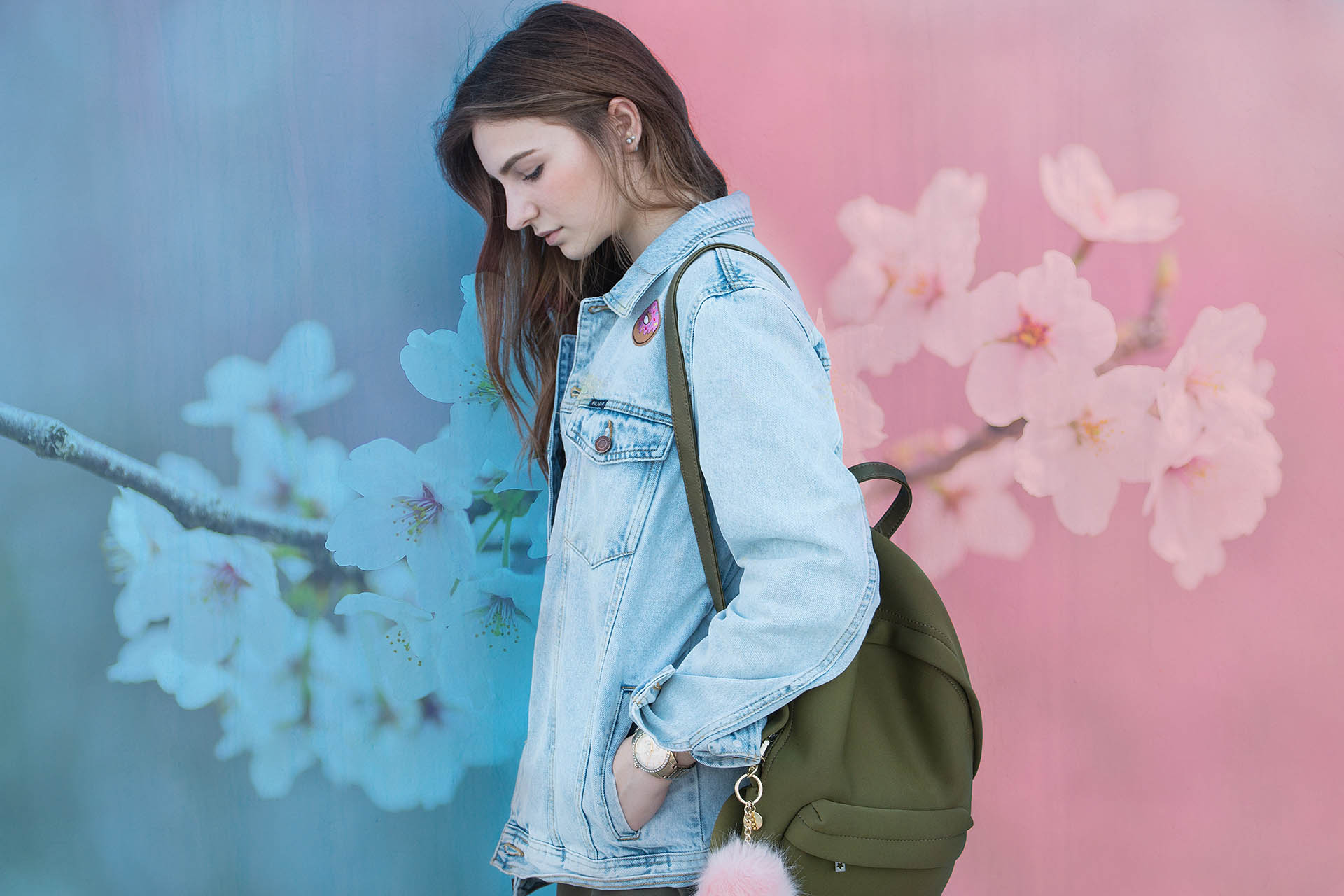 Cherry blossom season in South Korea is a magical time as the country shrugs off the winter chill and re-emerges bearing lovely colors and scents. The blossom typically comes into full bloom for one or two weeks, so mark the dates and make plan to visit the country when it turns positively pink. 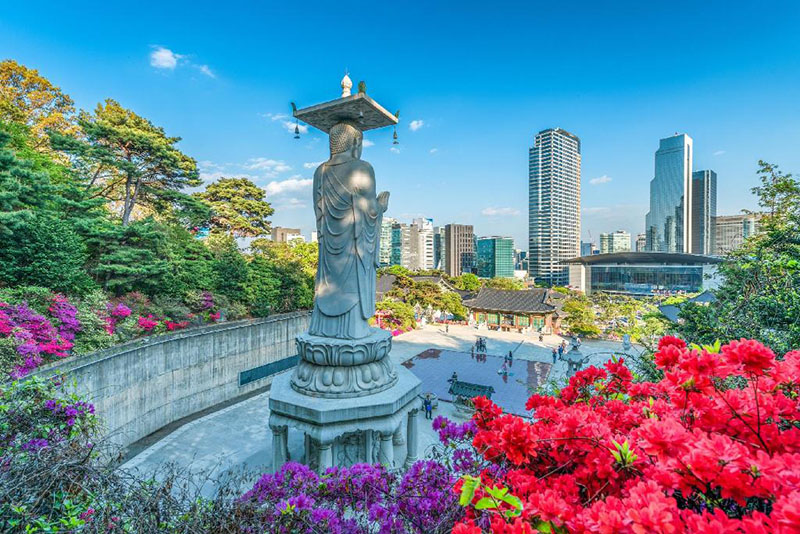 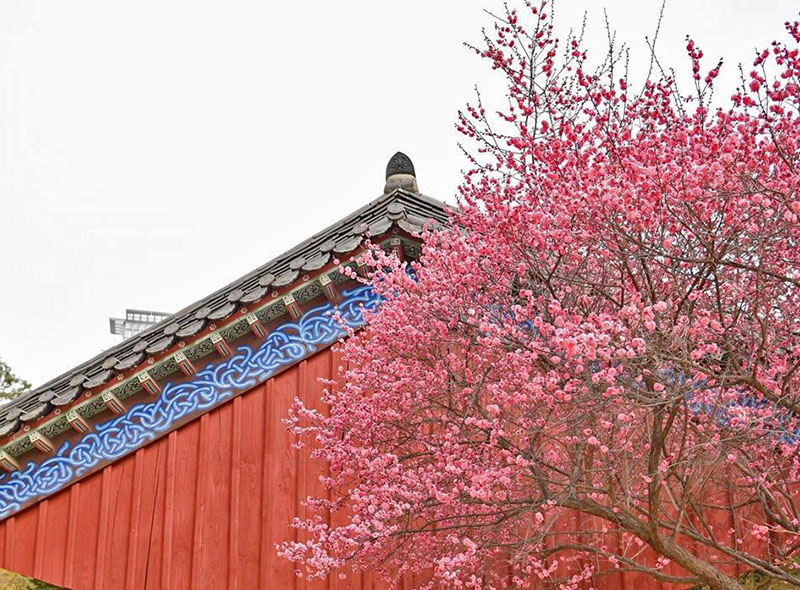 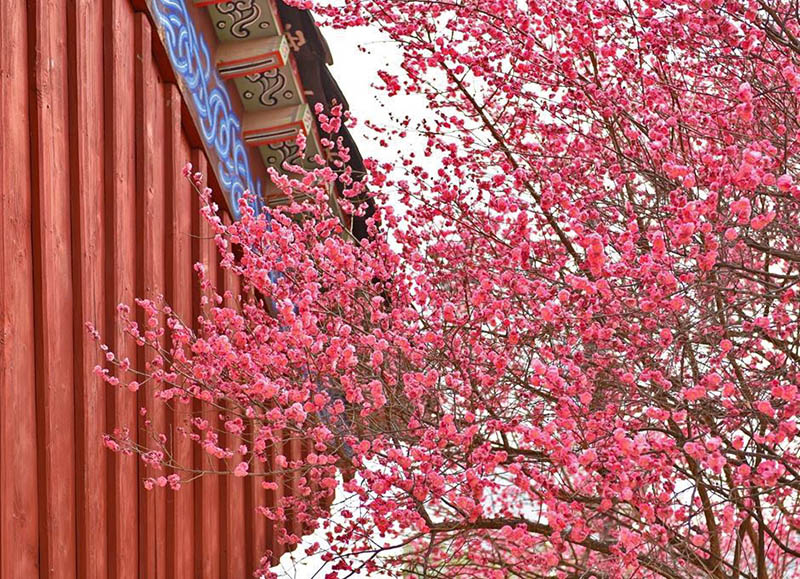 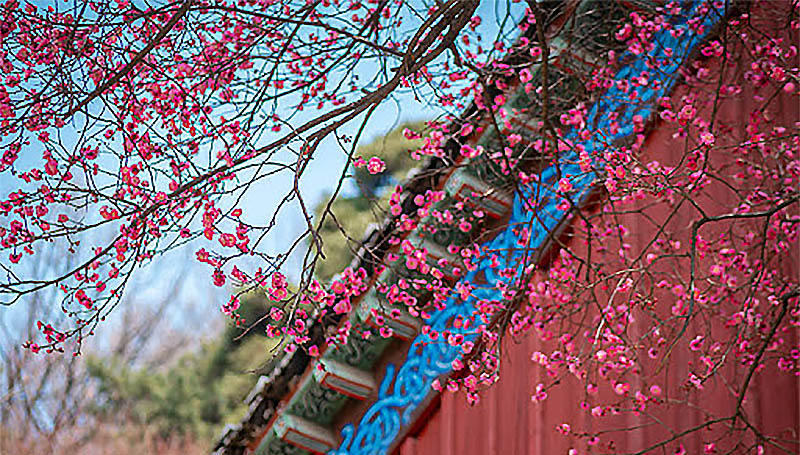 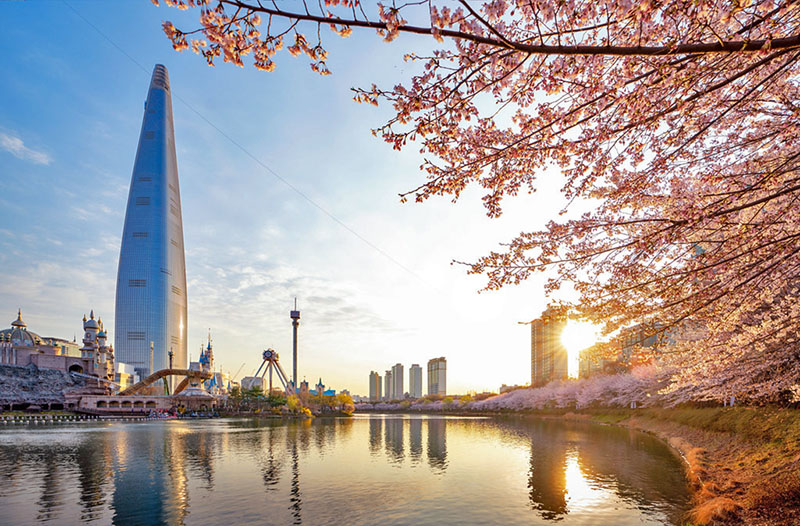 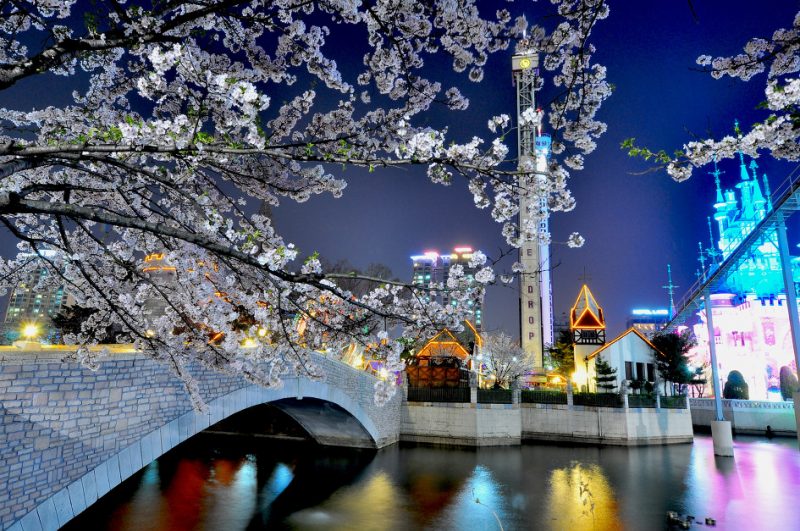 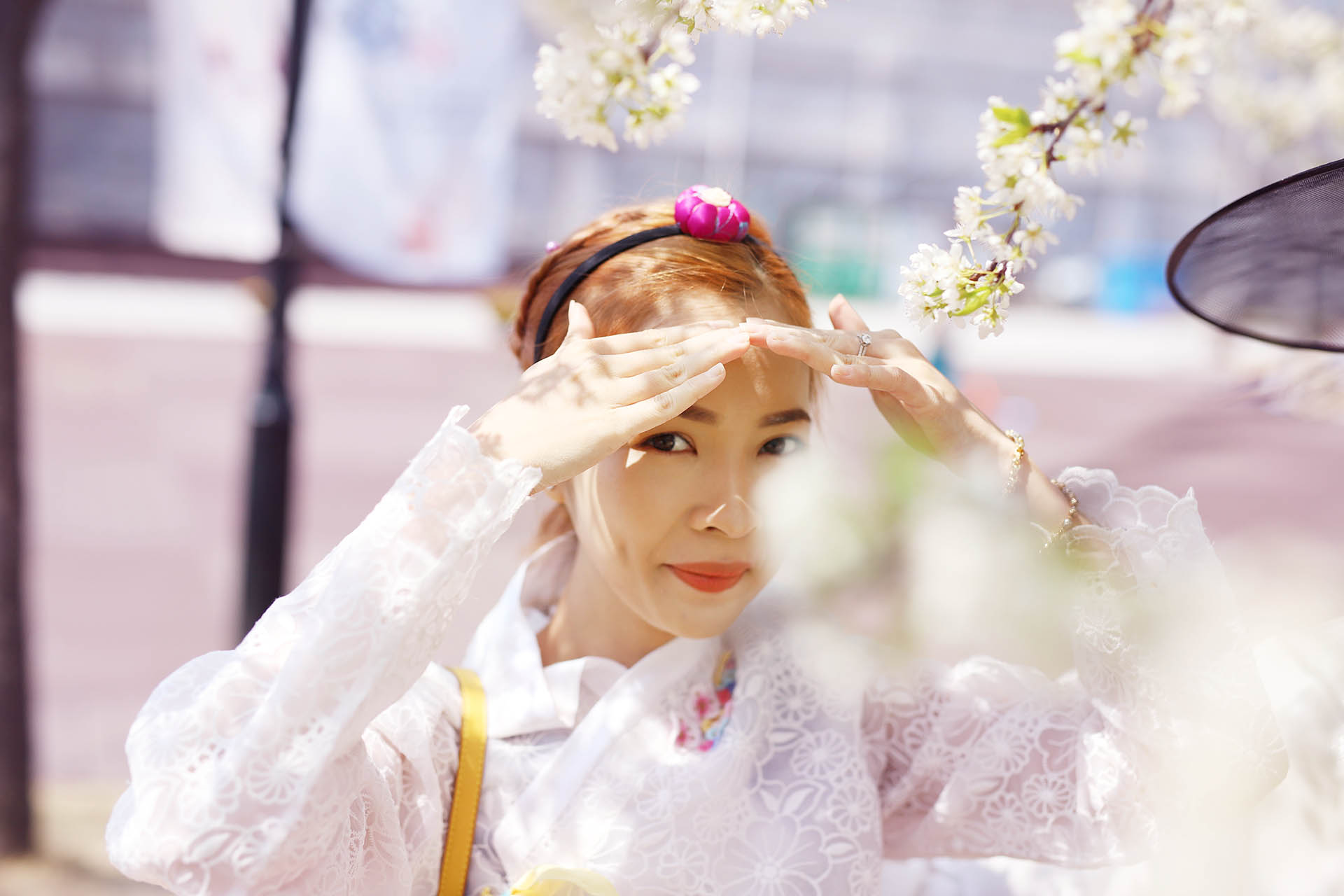 Pick up and drop off service at the airport are NOT included in this package(Optional)
If you take the airport limousine 6009, it will take roughly 1.5 hours. (It might take longer depending on traffic conditions)
Get off at “Nonhyeon Station”.
Please google the direction for further information!

Breakfast is included in this package 🙂 Enjoy the meal before your whole day tour!
The tour assistant will pick you up at Big John’s Place!

In a city block surrounded by the COEX and other tall buildings in Samseong-dong, Bongeunsa is a very peculiar sight. It seems dubious to have a temple in the very midst of Gangnam, but this Buddhist temple has existed for countless years ever since it was built in 794 during Silla Dynasty, boasting a history of more than 1,200 years. Erected in 1986 and completed ten years later, the giant statue of Buddha is one of the symbols of Bongeunsa Temple. Reaching 23 meters in height, the massive statue seems to look over all the inhabitants of the city. With more than 10,000 devout believers and hundreds of foreign tourists visiting daily, Bongeunsa Temple runs “Temple Life” and “Temple Stay” programs for ordinary people to experience life in the temple. It is the place to experience Eastern culture and take photos of beautiful wall paintings that will last a lifetime.

[Walking along the lakeside]

Seokchon Lake was originally part of the Han River, but following a land reclamation project in 1971, the lake formed. The new lake now has two parts, the East Lake and West Lake, since Songpadaero (a 6 km, 10-lane freeway) was built. Within Seokchon Lake Park is the West Lake and Magic Island. Magic Island is a man-made island that is connected by monorail to Lotte Adventure. Suitable for jogging and strolling, the lakeside is always busy with city-dwellers and office workers who come here for sports and leisure activities. A number of facilities are provided for this purpose, including an acupressure therapy track. Joggers and walkers can start on the urethane jogging track and finish on the barefoot acupressure track to maximize benefits. All year round visitors come to appreciate the changing seasons by the lakeside. When the cherry blossoms are in full bloom, the lakeside is colored light pink.

[Enjoy your day at the best theme park in Korea!]

Operated by Lotte Group, Lotte World is the perfect spot for entertainment and sightseeing for Koreans and international tourists alike. It is a theme park filled with thrilling rides, an ice rink and different kinds of parades, as well as a folk museum, a lake, accommodations, department stores and more. Lotte World is divided into Lotte World Adventure, a world themed indoor area, and Magic Island theme outdoors, next to Seokchonhosu Lake. Lotte World Adventure has districts representing different countries with various kinds of facilities and souvenir shops. You can enjoy watching parades, numerous films, laser shows, and tasting a variety of international cuisines year-round. Lotte World Adventure is the largest indoor amusement park in the world. The Folk Museum is also one of the most popular museums among international visitors. Folk cultural items on display date back 5,000 years in Korean history. Lotte World Garden Stage presents various themed musicals to match each season and Lotte World Star Avenue is the perfect place to experience Korean stars and the entertainment world.

Head Back to Big John's Place in Gangnam, Seoul (Drop off)

Breakfast is included in this package 🙂 Enjoy the meal before your whole day tour!
The tour assistant will pick you up at Big John’s Place!

Having been built in 1395, Gyeongbokgung Palace is arguably the most beautiful and remains the largest of all five palaces in Seoul. The premises were once destroyed by fire during the Imjin War (Japanese Invasions, 1592-1598). However, all of the palace buildings were later restored under the leadership of Heungseondaewongun during the reign of King Gojong (1852-1919).

Located inside Gyeongbokgung Palace, the National Folk Museum of Korea presents over 4,000 historical artifacts that were used in the daily lives of ordinary Korean people. Here you can fully immerse yourself in previous domestic and agricultural lifestyles, and learn about Korea’s cultural beliefs. The National Folk Museum of Korea has three permanent and two special exhibitions as well as a library, souvenir shop, and other subsidiary facilities.

[Blue House]
The Blue House (Cheong Wa Dae) where the president of Korea lives is located in this area, so you can stop by during the tour!

[Insadong]
Insadong is a popular neighborhood in the heart of Seoul that is often visited by locals and tourists wanting to experience the traditional culture of Korea. Streets and narrow back alleys are lined with art galleries, wooden tea houses, restaurants, cafes, and small shops selling arts and crafts. The main street, Insadong-gil, runs for 700 meters from Tapgol Park in the south to Anguk-dong Rotary. Insadong is one of the best places in Seoul to find tea, calligraphy materials, folk crafts, antique furniture, Hanbok (Korean traditional costume) and Hanji (Korean traditional paper). Many Korean ceramics, some dating back thousands of years, are bought and sold here every day. Their prices range from a few won to millions of won. Many of the streets and alleys are blocked off to vehicles on Saturdays (14:00-22:00) and Sundays (10:00-22:00). This is the best and most popular time to visit.

Namsan Seoul Tower was built in 1969 as Korea’s first integrated transmission tower beaming television and radio broadcasts across the capital. Since opening to the public in 1980, it has become a much-loved Seoul landmark. The tower’s main attractions include multi-colored digital art projected onto the tower at night, a digital observatory, a roof terrace, the Hankook restaurant, the n. Grill restaurant, and the Haneul (Sky) Restroom. Namsan Seoul Tower’s mountain surroundings on Namsan Mountain have made it a popular place to unwind for locals and tourists alike. Situated on top of the N Plaza, the Roof Terrace is a spacious wooden viewing deck whose exotic atmosphere makes it very popular with lovers. A recent attraction for courting couples is “Locks of Love,” thousands of padlocks attached to the fence by romantic Seoulites symbolizing their undying affection.

Yeouido Cherry Blossom Festival is a representative festival in Seoul, taking place every April. Yeouiseo-ro, the street behind the National Assembly Building, is lined with cherry blossom trees and is the most famous cherry blossom street in Seoul. Visitors can take a stroll along the Hangang River through a tunnel of these majestic trees. Other spring flowers blooming beneath the trees include azaleas and forsythias. There are also cultural street performances, a flower decoration exhibit, and a photo exhibit taking place throughout the festival period.

Head Back to Big John's Place in Gangnam, Seoul (Drop off)

Tour Assistant will not meet you on the last day. Check out on your own and enjoy your free time!

Once you make your booking, HaB Korea team will check your booking status and approve your reservation within one working day if there is no problem.

It’s time to have fun in Korea, once your booking approved! Please be punctual on your booking date in order to go through all of the plans in a timely manner. Even though you are a solo traveler in Korea, there are still some wonderful ways to enjoy this city! With HaB Korea, there are various options for your ways of exploring the city from shopping, sightseeing to K-POP!

13 travellers are considering this tour right now!
Send this to a friend