When you book with an account, you will be able to track your payment status, track the confirmation and you can also rate the tour after you finished the tour.
Sign Up
54987

This concert ticket is for foreigners only, Korean passport holders are not allowed.

Please note that people under the age of 19 are not allowed to enter. Ticket reservations will be available after completing the adult verification process.
※ Note: People who born before Dec 31, 2000, can attend this performance.

★ HaB Korea is the official ticket sales affiliate of the EDC KOREA.

Special things that nobody would have experienced in any EDM festival is waiting for you. Are you ready to enjoy the carnival in one’s imagination, various stages, spine-tingling ride, unique performances and art with EDC? Don’t miss the EDC KOREA, where your imagination becomes the reality ‘Electric Daisy Carnival(EDC) Korea’ which held for the first time in Korea will be held at Seoul land on August 31 ~ September 1. 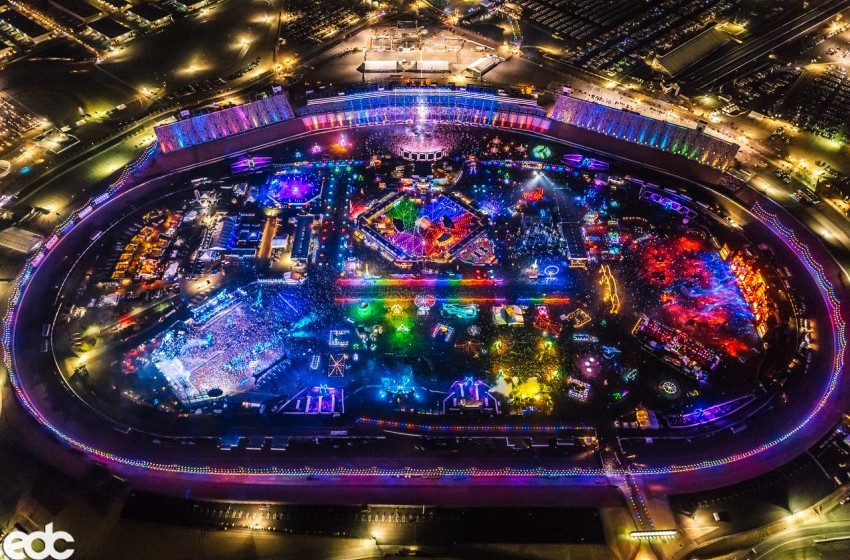 ‘Electric Daisy Carnival Korea(hereinafter EDC Korea) announced 36 DJ line up. ‘EDC’ is the performance that started at Las Vegas, United States and celebrating its 23rd anniversary this year. It is famous by audiences all over the world every year and held in other nations such as Mexico, China, Japan, etc. ‘EDC’ that will be held for the first time in Korea showed it’s potential power through selling the whole blind ticket which sold out before announcing the lineup. At this year’s EDC Korea, there will be 36 teams including the world famous DJ Alesso, leading progressive group, deadmau5 of Canada.

EDC Korea is preparing for the special program which meets the ‘carnival’ concept not only the DJing performances. 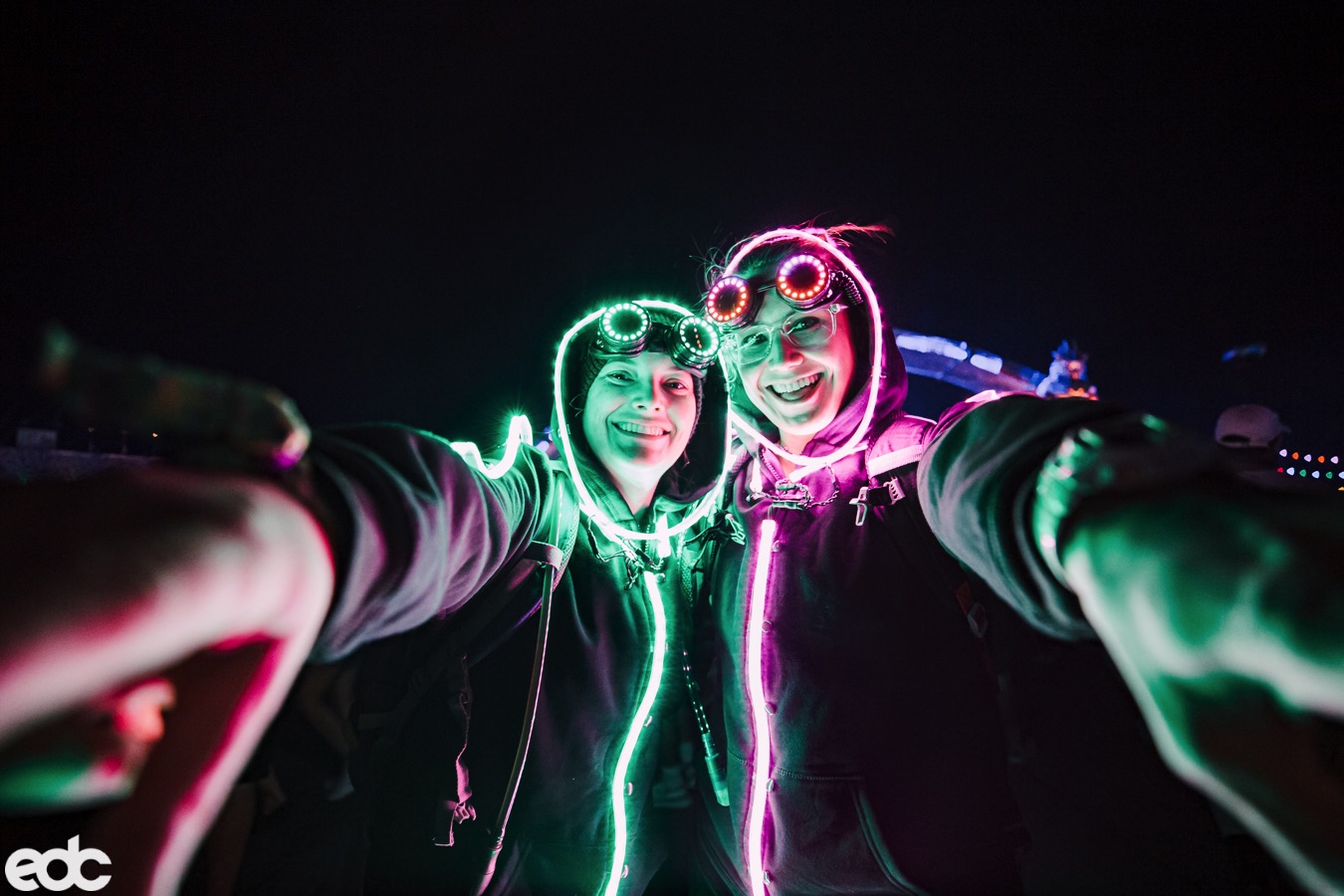 Unlike any other EDC experience in the world, the Korean edition will be held at an amusement park. Neon wonderland ‘Seoulland’ will be the new home of Insomniac’s latest expansion, featuring roller coasters, carousels, arcades and more! 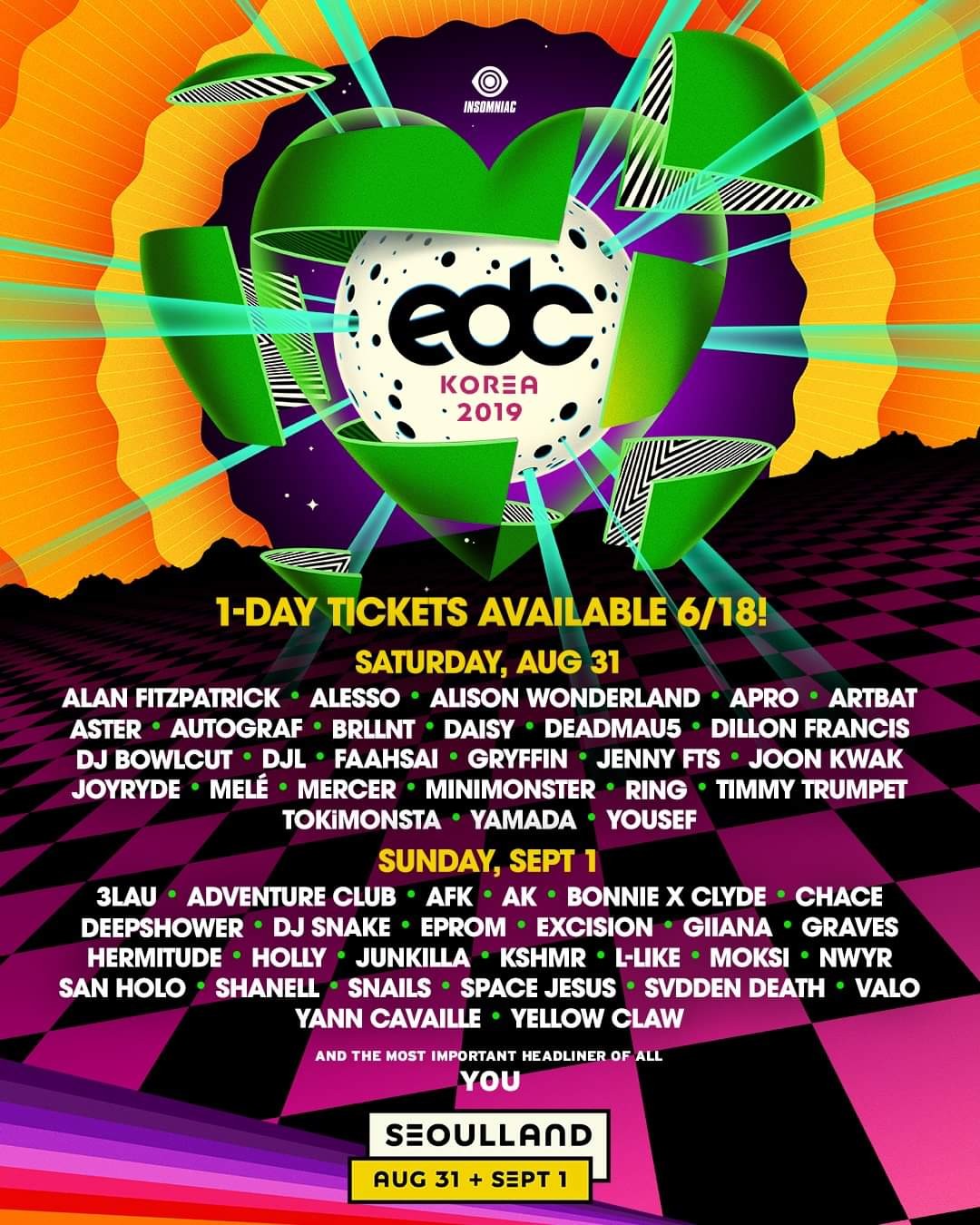 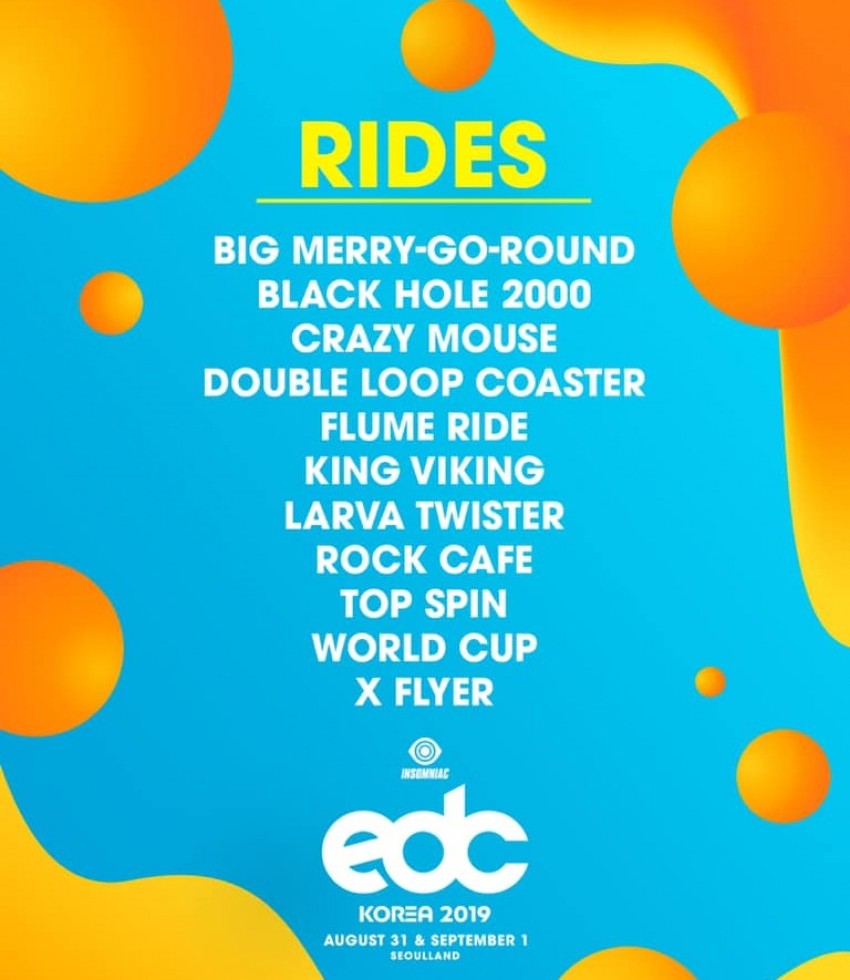 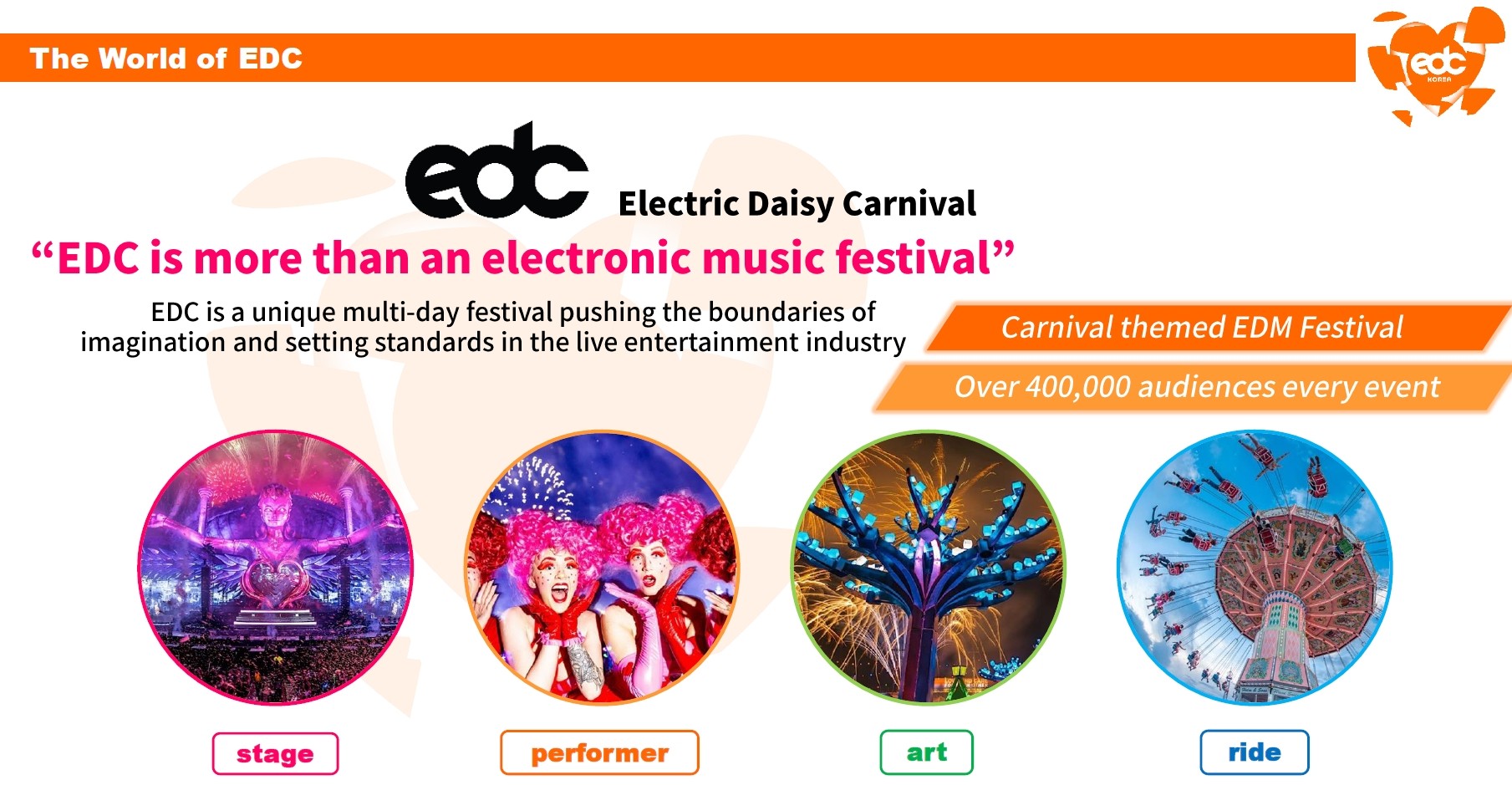 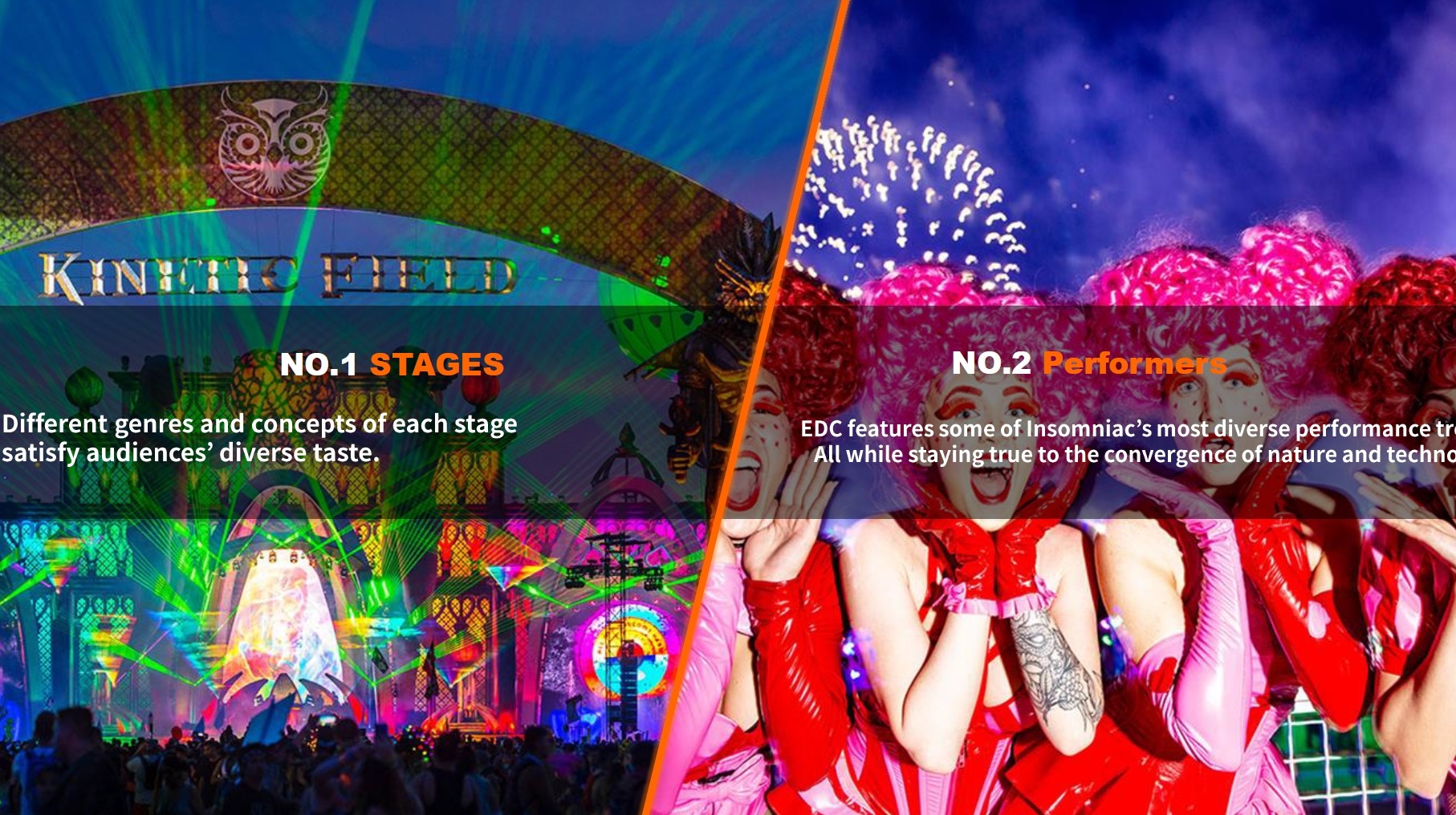 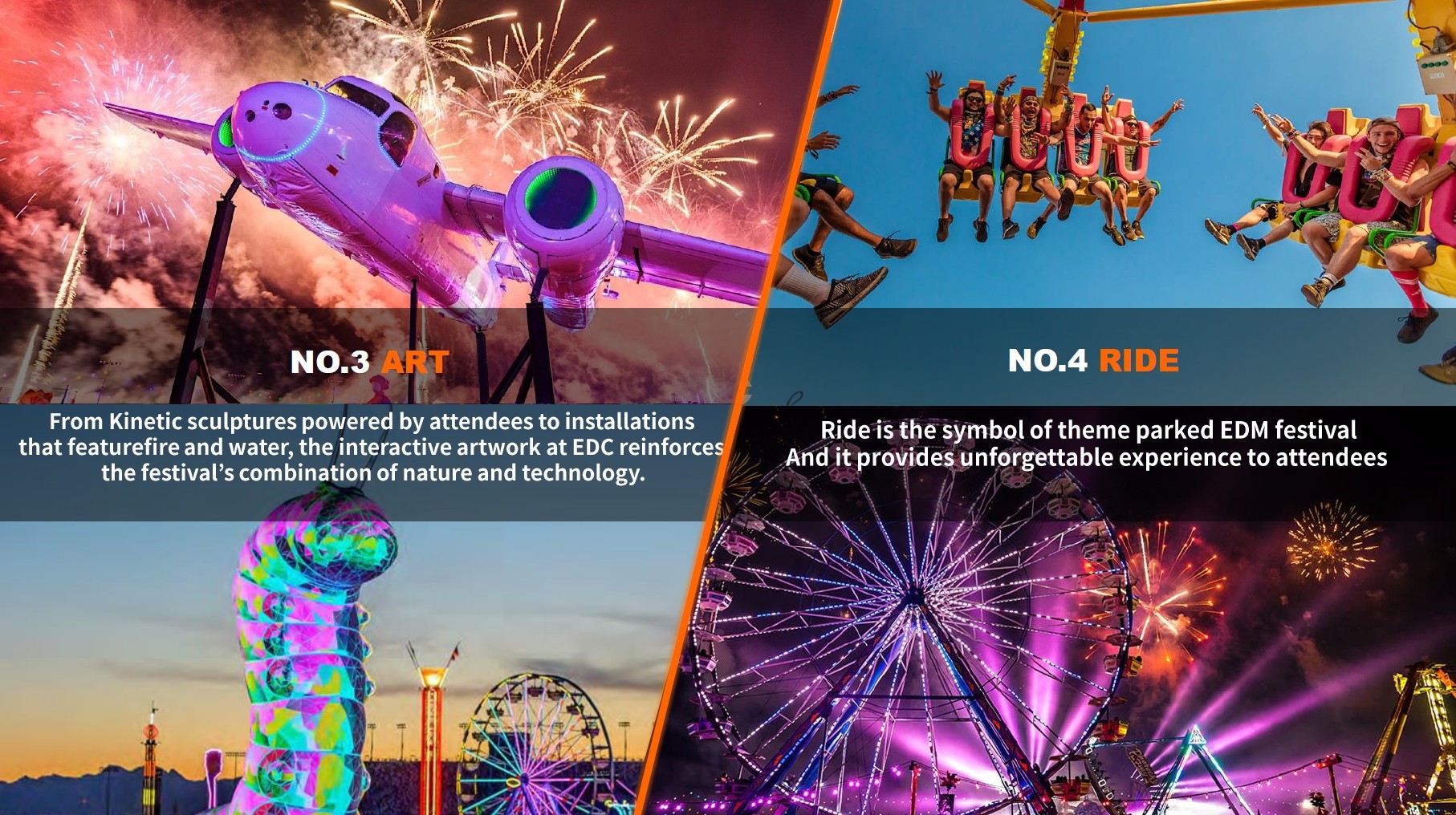 When you decide to make a reservation, please select the date and package you would like. If there are more than 2 groups, please inquire separately.

You can check your confirmation

Show your eVoucher to the field staff at your pickup location and enjoy your special time. Please be punctual, the shuttle bus will be leaving on time.

This performance is only suitable for those aged 19 or over, and it is impossible to cancel or refund in case of making a reservation as the minor.

People who born before Dec 31, 2000, can attend this performance.

We check everyone’s identification at the ticket booth. In case we identify someone who tries to enter as the minor, the entrance would be restricted and it’s impossible to refund for such issues.

The ticket can be exchanged at the foreigner exclusive ticket booth.

In case of receiving a ticket on the site, please present e-voucher with identification.

Receiving on-site ticket is limited for one time (In case of purchasing multiple tickets, the buyer should receive whole tickets by oneself)

Ticket(including robbery, damage, no-possession, loss) can’t be re-issued or exchanged, and someone who does not have a ticket can’t enter the performance hall for any reason.

Liability of losing ticket is up to oneself and we inform that host/associates/supervisor have no liability about such issue so please be careful of possessing one’s own ticket.

[About wearing the entrance band]

For 2 days pass, one should wear entrance band from the first day without damage till the second day.
(Should have to wear the same band for two days and it is impossible to wear again, so please be aware of not taking it off)

Entrance band can’t be reissued for reason of damage or loss, so please be careful of not to harm it. But, in case of asking re-issue for unharmed entrance band under the reason of it do not fit one’s wrist well, we will check about the condition of the band on site and will re-issue the band after reclaiming the band.

To prevent issues of illegal ticket dealing such as scalper’s ticket, re-entry after the entrance is strictly prohibited and refund or cancellation under those reasons are not permitted.

Schedules, artists, time table can be changed or canceled because of the artist’s circumstances and refund or partial refund will not be made under such reason.

This festival will be proceeded normally in case of rain and only can be canceled in situations such as heavy rain warning, gale warning, and the typhoon warning. In case of other circumstances(typhoon, terror, social issues), it will follow other performances’ customary action.

Please avoid distracting other audience watching the show, and in case we judge such actions as a significant distraction, it can be restricted and also can be forced out of the hall. Depending on the degree of such action, someone can be forced out without any warning. No refund will be made under such reason.

Please be careful about keeping the valuables. The host will not bear any responsibilities about the robbery, accident around the concert hall because of one’s own inattention.

Smoking is only permitted in the designated smoking area.

This performance includes various special effects including the stage management. Please avoid making a reservation for elders, pregnant woman, and feeble-minded person. In case of making a reservation for those, please have a consultation with a doctor and contact the host prior to the performance for sharing the ways to cope with an emergency situation. We don’t bear any responsibility for injury or diseases during the performance if we do not have such issues beforehand.

There is a possibility of causing the damages of one’s property, hearing loss, seizure, severe health-related issue, or death around the place where this performance held. Attendance should be well-aware of every risk factor. In case of getting injured or wounded others during the performance, attendance bears every responsibility about such situations.

Because of some festival’s attributes, some place can be limited in viewing.

Side effects which use water can be applied during the festival and have the possibility of staining an audience’s cloth and belongings.

Just enjoy the decoration of site only by one’s eye. In case of any damage, one can be subject to the legal responsibility

Any individual event, promotion, or commercial act will be not allowed without prior consultation
There is CCTV around the hall and will be recorded all times.

For safe and pleasant watching the performance, we operate security clearance during the entrance. If anything prohibited caught during the scan, such things should be kept in pay storage and will not be stored by the host.

In case of identifying the prohibited items, such items can be confiscated and would not be returned.
Additional checkup using other instruments such as metal detector or X-ray can be made.

Every outside food including beverage/alcohol/water and bottle, can
Dangerous objects including knife/scissor/firecracker/firearm/explosive/oil/star shell and various radio communication instruments and helmet except for the cellphone.

Any objects that can distract others watching the performance such as flagpole, long umbrella, selfie-stick.

Dummies, solid balls or other playing kits, balloon, water gun, and other accessories with spikes and chains.
Flashlight, laser goods, LED decoration, cheering tools which can distract the stage management.

Objects such as electric mobilization device including a moped, electric wheelchair, and other big cargo, a bicycle can be stored at the stockroom.

Pet except for the guide dogs for blind people.

We prohibit the bringing of illegal drug which got restricted under the psychotropic substance management law and other related actions. In case of uncovering such drugs, those caught of having such drugs will be banned for this festival permanently.

Every part of the EDC KOREA 2019’s performance hall is photo shooting limited area and only acceptable for the media that made prior consultation under the control of the host.

Ordinary level of photographing such as commemorative photography in the concert hall is allowed but some kind of filming that uses a specialized instrument(such as DSLR) is not allowed.

Photographing or recording of performance or artists can be restricted for the performance’s progress and protecting their portrait rights. Anybody caught breaking can be deported from the hall after deleting such data(photo, video, etc) and also can take legal steps.

※ Advance tickets for foreigners will be collected at the ticketing counter You need to bring your ID card (passport, alien registration card, copy of passport + at least one ID card issued by your country) Please bring it with you. If there is no such document, ticket exchange is not possible.

※ If you lost or damaged your ticket, it is your fault. The ticket will not be reissued and you cannot enter the concert without a ticket.

※ The concert will be broadcast live, so many cameras will be there. Because of cameras, your view could be blocked.

※ After the concert starts, you could be not permitted to enter.

※ For safety and security, any food and drink except water will be prohibited in the concert venue.

※ If you disrupt others’ view with a tripod or a large camera, you could be restricted by the staff.

※ If you book a ticket illegally or if you are a Korean, your booking will be automatically canceled and you cannot get a refund on your ticket fare. 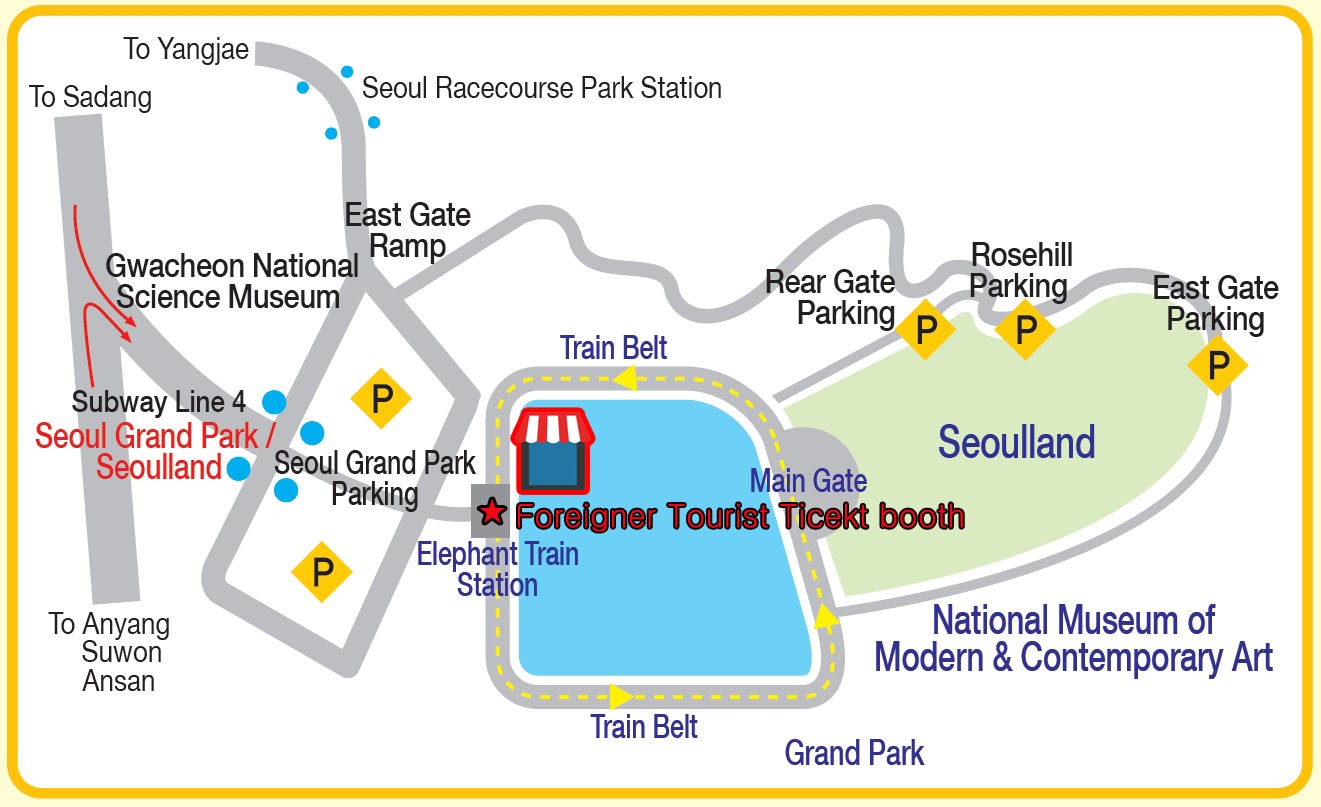 [Ticket booth only for the foreigner]

[Subway] Seoul Grand Park Station (Seoul Subway Line 4), Exit 2.
The quickest and easiest way to travel to Seoulland is via subway. You can arrive at the main gate of Seoulland by taking the ‘Elephant Train’ from Subway Line 4, arriving at Grand Park and Seoulland Station.

★ This ticket is to be sold as a set and no item will be sold separately.
★ No cancellation & amendment after booking confirmed​

Special things that nobody would have experienced in any EDM festival is waiting for you. Are you ready to enjoy the carnival in one’s imagination, various stages, spine-tingling ride, unique performances and art with EDC? Don’t miss the EDC KOREA, where your imagination becomes the reality ‘Electric Daisy Carnival(EDC) Korea’ which held for the first time in Korea will be held at Seoul land on August 31 ~ September 1.