When you book with an account, you will be able to track your payment status, track the confirmation and you can also rate the tour after you finished the tour.
Sign Up
2166 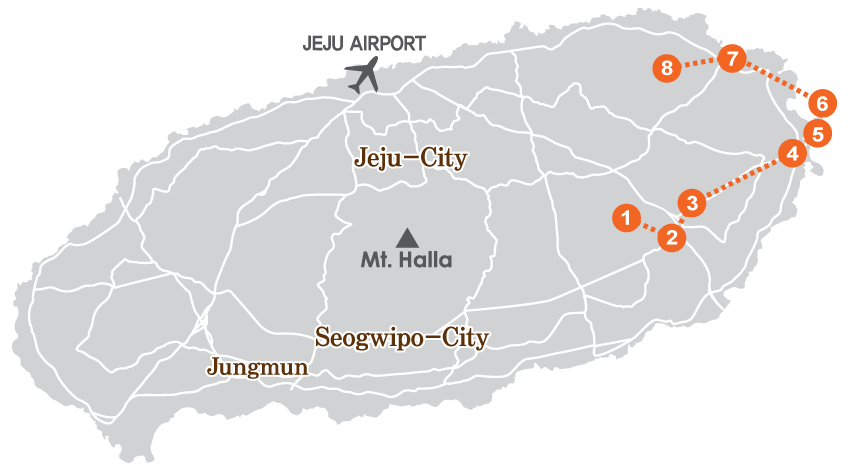 Horses can be seen all around Jeju island. Horses were the most preferred gifts to be presented to the King from Jeju because the island was popularly called “the pasturage of horses”. Horse riding on a Jeju trip is something that should not be missed. The horses used for riding are known as Jejusanma and are of mixed breeds. Experiencing actual horse riding will make you feel closer to horses.

Back in the day, Jeju island was occupied by Mongol for 100 years. At that time, Mongolian brought lots of horses because they were horse-riding people. So there are many Mongolian horses in Jeju island now. In this performance, you could see the life of Genghis Khan, also could enjoy marvelous horse riding show; actual Mongolian descendants put on the great performances.

Located at the foot of Mt. Halla on Jeju Island, Seongeup Folk Village is a small town that holds a vast amount of culture. Cultural properties in the folk village have been handed down from generation to generation and include treasures such as residential houses, Confucian shrines and schools, ancient government offices, stone statues, large millstones (pulled by horses or ox), fortress ruins, and stone monuments. Among the cultural gems of the folk, village are intangible cultural assets such as folk plays, native foods, local folk craftsmanship, and local dialect. Even the trees are an important part of the area’s heritage. Several zelkova and nettle trees that are hundreds of years old stand at the center of the village, preserving the dignified atmosphere of a bygone era.

The Seongeup Folk Village shows the unique culture of Jeju Island: the black lava rock walls, the straight but curvy alleys to block the wind, and the stone grandfather statues (Harubang), which have become a prime feature of the landscape. The local black-haired pigs and tongsi (pigsty / restroom) are especially well-known characteristics of Jeju folk culture. The Jeju black pork is said to be very nutritious.

Enjoy your lunch with delicious local food of Jeju Black Pork BBQ. (Or you can choose Bibimbap)

Jeju Black Pork
Wild black boar meat is marinated in a special sauce then grilled over a steel pan with various vegetables.

Bibimbap(Rice Mixed with Vegetables)
Bibimbap is a delight, which offers a variety of tastes and colors. It is filled with all sorts of vegetables and is good for your health. A dish made by mixing rice with various other cooked vegetables. It’s great for experiencing different vegetables, pleasing to the eye, and full of nutrients.

Haenyeo refers to female divers who dive into the ocean water to gather various shellfish, seaweed, etc, without using any underwater diving equipment. When diving underwater, a Haenyeo carries only a pair of goggles, a round ball-like tube to keep her balance, and a basket to put her collections in. Such women involved in the fishing industry are known to be scattered all around Jeju-do, Korea, Japan, and Russia.

Seongsan Ilchulbong Peak rose from under the sea in a volcanic eruption over 100,000 years ago. Located on the eastern end of Jejudo Island, there is a huge crater at the top of Seongsan Ilchulbong Peak. The crater is about 600m in diameter and 90m high. With the 99 sharp rocks surrounding the crater, it looks like a gigantic crown. While the southeast and north sides are cliffs, the northwest side is a verdant grassy hill that is connected to the Seongsan Village. The ridge provides an ideal spot for walks and for horse riding as well.

The tour bus takes the beautiful coastline of Noth-Eastern Jeju and you will pass by Hado Beach & Saehwa beach whilst heading to Manjang cave. Plus, Jongdalri Shore Road is known as for a hydrangea during Summer.

Manjanggul Cave is one of the finest lava tunnels in the world and is a designated natural monument. A lava tunnel is formed when the lava that was deep in the ground spouts from the peak and flows to the surface. Manjanggul Cave has a variety of interesting structures inside including 70cm lava stalagmites and the lava tube tunnels.

Daheeyeon is a multi-theme park known as Cave Café & Daheeyeon Green tea field, can do various activity such as Zip Line, Foot Bath in Daheeyeon. The guests of Yeha will get Foot bath in Daheeyeon if not going to Manjang Cave due to the weather condition.

It is a package that you can travel all popular tourist attractions of the east of Jeju Island within a day. This tour can cover Horseback riding experience, Woman diver show, Seongeup Folk Village and UNESCO World Heritage site, Seongsan Ilchulbong Peak and Manjang Cave.