When you book with an account, you will be able to track your payment status, track the confirmation and you can also rate the tour after you finished the tour.
Sign Up
1833 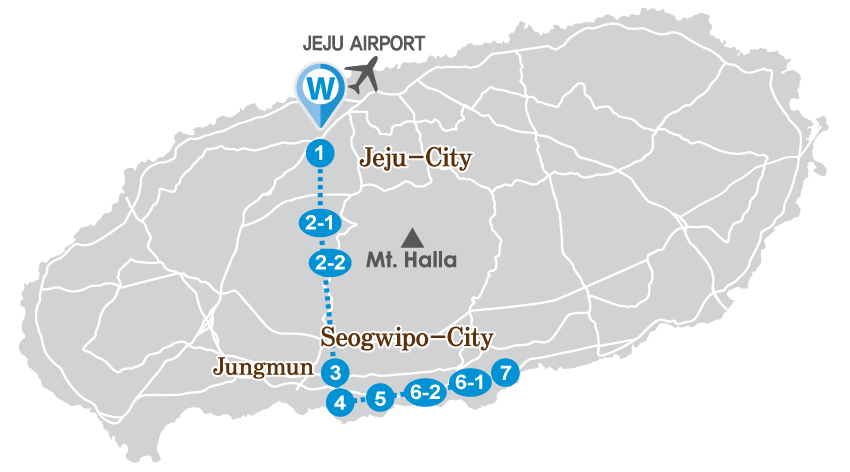 It is called the Jeju Mysterious Road or Dokkaebi Road. It earned its name because when you place a car on this steep road, the car does not roll down but it goes up, defying gravity. This is actually an optical illusion, in which the surroundings trick the eye and make the road look like it is tilted in the opposite direction.

It starts at southern National Park Visitor Center and continues to Eoseungtaeng-oreum Summit. The trail is 1.3km long and a one-way trip takes 30 minutes. Eoseungsaengak is an oreum (parasitic cone volcano) for hikers who want to go for an easy stroll after visiting the Visitor Center. On clear days Chuja Island, Biyang Island, Seongsan-Ilchulbong and Jeju Island’s east oreums can be seen. At the summit, there still remain some Tochikas, which were military facilities used by the Japanese during the occupation of Korea.

The Hallasan National Park Visitor Center provides an overall view of Hallasan’s natural environment, culture, and history. In exhibition halls 1 through 3 there are seasonal videos that show the creation and myths of Hallasan, its geography and geology, and historical relics. The plants and animals, forest experiences, and ‘365-days of Safety’ are also introduced to the visitors as they move along. There is also a photo zone in the lobby that allows people to take pictures in front of scenes of Hallasan’s slopes as if they were actually there.

Alive Museum is the first museum to introduce a brand new concept of ‘Optical Illusion Art’ and ‘Interactive Art’ to Korea. By getting involved in the interesting artworks, visitors can produce their own amusing artworks with their natural facial expressions and reactions. Nowadays, Alive Museum is attracting much attention and growing as a Korean wave representative overseas.

The columnar joints in the Jungmun Tourism Complex were designated as Natural Monument #433 on December 27, 2004. They look like a large folding screen with black hexagon stone pillars. When you visit here and look at the columnar joints with beautiful ocean waves crashing against them, you will be mesmerized by nature’s greatness.

It was named Oedolgae Rock since it is isolated far from the land and located lonely in the middle of the sea. There is also a legend that says that the rock was actually a grandmother who transformed into a rock after waiting for a grandfather to return from fishing, and so it is also called Grandma Rock.

The Yakcheon temple means “The Temple where medicinal water flows.“ The temple with the largest Buddhist status in Asia, it is renowned for mystical stories about the medicinal water.

Jeongbang Waterfall is one of three main Jeju waterfalls, along with Cheonjiyeon Waterfall and Cheonjaeyeon Waterfall. It is the only one in Korea which spills directly into the sea. Harmonized with the sea, two 23m-tall columns of a waterfall with a sound like thunder and offer us a magnificent view. Cliffs and old pine trees surrounding the waterfall are always scenic. It takes about 5 minutes to walk from the parking lot to the waterfall.

It is a package that you can travel all popular tourist attractions of the south of Jeju Island within a day. This tour can cover Mysterious Road, Mt.Halla, Jeonbang Waterfall, Yakcheon temple, Jusangjeolli and Alive Museum.

18 travellers are considering this tour right now!
Send this to a friend