When you book with an account, you will be able to track your payment status, track the confirmation and you can also rate the tour after you finished the tour.
Sign Up
2663 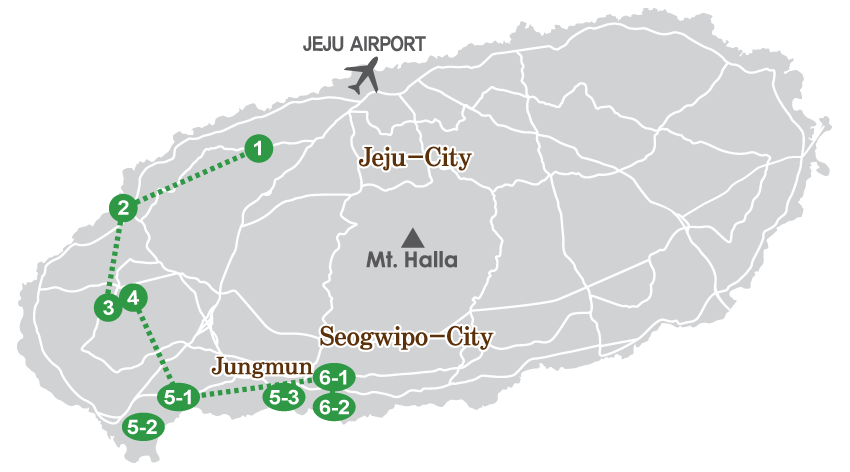 Hyupjae Beach is one of the popular places that many tourists visit in anytime. The white sand beach has extra fine sand mixed with shells that glitter with silver and the emerald-colored water is crystal clear. Also, one of well-known island ‘Biyang do -flown island’ can be seen from Hyupjae beach.

Hallim Park, located western 33km away from Jeju City and west of Mt. Hallasan along the beach in Hallimeup, is one of the most popular tourist spots on Jeju Island.
Hallim Park, almost 100 thousand square meters, has a variety of gardens that can be enjoyed in any season. Visitors can enjoy checking out Palm Tree Road, Jeju Stone, and Bonsai Garden, Water Garden, Subtropical Botanic Garden and much more. The most famous tourist sites in Hallim Park are Hyeopjaegul and Ssangyonggul Caves known to be the only two-dimensional caves in the world. In addition, a folk village, children’s amusement park and outdoor resort facilities make it enjoyable for both children and adults.

O’sulloc Museum teaches visitors about Korea’s traditional tea culture. The “o“ in “o’sulloc“, means to appreciate and enjoy, and it also stands for the origin of sulloc, only sulloc, and of sulloc tea.

The museum, which first opened in September 2001,is widely known in Korea. The entire building takes the shape of a green tea cup. It seeks to harmonize the cultures of the West and East, and past traditions with the modern world.

At the O’sulloc Museum, not only can visitors enjoy unique o’sulloc teas, but they can relax next to the lotus pond in the indoor garden. The second floor of the building has an observatory, so visitors can enjoy the views of the nearby green tea fields and the surrounding landscape.

We could appreciate the blissful and picturesque ocean view of Sanbang Mountain, Brother Island, Hexagon Lave cliff of Mt.Songak and Dragon Coast, which have been designated as Global Geoparks, from the Sanbang Mountain Cruise(about 1hour).

It gots its name because the coastline looks like a dragon that is jumping into the ocean. Dragon coast is a sandstone bed created by layers of sand that have been deposited for 10 million years.

It is a trachytic tuff lave dome connected to the sedimentary layer of Dragon coast. It is a bell-shaped tholoid that stands tall in the plains of Southwest Jeju.

It is consisting of cinder in the middle of the crater and its tuff ring, Mt.Songak’s peak, which can also be considered as its mouth, has a depth of 69m and has completely preserved its active form.

It has a beautiful harmony that makes you think of a collection of nature. If you enter Brother Seashore Road, you will see a homey small village, and traveling through this village for about five minutes will lead to a vast blue ocean that makes for a marvelous view. Mt.Sanbang and Mt.Songak are standing on each side of the coast, so it looks like the coast is guarded with shields. Also, Brother island, which looks like two brothers, stands in the middle of the ocean, bringing comfort to visitors.

Space where imagination becomes reality through Music! We could enjoy the best New-Media Hologram Show here; can meet our favorite K-pop stars in the virtual space that combines hologram and media facades. In this futuristic show, can also become a part of the show. No need to be a K-Pop Fan to enjoy Play K-Pop Museum, because it has various exhibitions such as ‘Be the star’, ‘Meet the star’, Live 360 3D, Live Holo Concert, Sound Turner, etc so that Non-K-Pop Fan enjoy this museum as well.

Teddy Bear Museum offers a lot of interesting things to see with various themes such as history and art of Seoul and a tour around the world, in addition to teddy bear’s history of more than 100 years. Displayed Teddy bears are handmade by designers with premium goat wool for high quality. There are other teddy bear-related products available.

According to a legend, Cheonjeyon Falls means “the pond of God” where nymphs descend to take a bath. The first cascade of Cheonjeyon Waterfall is 22 m high and the water forms a pond 21 m in depth. The water flows farther along to form the second cascade of 30 m high. Up from Cheonjeyon Falls is the stunning arch bridge Seonimkyo, which is also called Seven Nymphs Bridge. Water springs from a spot between the precipice of the waterfall and the lower clay layer. From the ceiling of a cave located east of the first waterfall, the water drops and grows into several streams of water. Since it is gushing out of the stony ground, the water has been used for curing diseases as well as for drinking. From ancient times, people have believed that they can recover from any disease if they stand under a waterfall on either the Buddhist All Souls Day or Cheoseo Day (at the end of August). Right next to the falls is Yeomiji Botanical Gardens and many other tourist attractions.

It is a package that you can travel all popular tourist attractions of the west of Jeju Island within a day. This tour can cover Hyupjae & Gumneung Beach, Hallim Park, Suweolbong, O’sulloc Green tea field an Mt. Sanbang and Teddy Bear Museum.